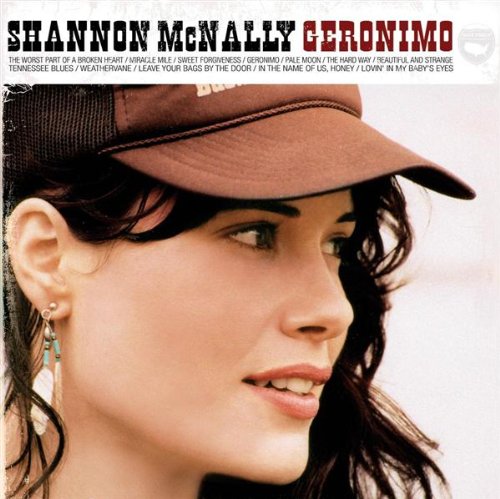 Drawing on the defiant spirits of outlaws and visionaries such as Jesse James, Susan B. Anthony, Little Richard, she takes her listeners on a timeless and haunting journey through her self coined North American Ghost Music on her new album 'Geronimo.' Armed with a spine tingling voice, easy inner beauty, and songs that linger, she almost makes you wish she'd rob your bank. Produced by Charlie Sexton, mixed by Grammy Award winning Engineer Trina Shoemaker, and featuring stellar musicians like bassists Tony Garnier, and Tony Hall, multi-instrumentalist Greg Liesz, drummer to the stars Raymond Weber, keyboard legend Ian McLagan, and Sexton himself, 'Geronimo' is a chapbook of stories, a collection of gritty blues, country, roots, and rock. Narada. 2005.

Geronimo, the follow-up to Shannon McNally's intoxicating 2002 debut, "i"Jukebox Sparrows, follows the same rootsy pop/Ramp;B/folk/alt-country path, yet goes the distance to prove that the transplanted New Yorker, now living in New Orleans and soaking up the bayou blues, is more than just a Sheryl Crow/Bonnie Raitt clone. Her songwriting--deft, atmospheric, and loaded with memorable lines ("Listening for the sound of my last hope hitting the ground")--settles mainly on the searing emotional pain of romantic dissolution, yet always offers enough irony and universal touchstones (e.g., running into an old lover by chance) to win over even the most casual listener. She hits her stride on the title cut, which uses the sad, shameful defeat of the Native Americans as the subtheme to a well-fought battle of love. As on her debut, McNally rarely veers out of a mid-tempo groove, and producer Charlie Sexton, who keeps things spare but interesting (like steel drum accents on "Lovin' in My Baby's Eyes"), is right to encourage only the one overt rocker, "The Hard Way," and to simply let the artist be herself. McNally is so irresistibly winsome, sexy, seductive, and vulnerable that, chances are, you'll be ready to move in by the end of the opening track. --Alanna Nash

The Best Trail Running Shoes for Women in 2021

Trio Adds New Routes to Remote BC Valley: ‘Endless First Ascents to Be Had’

Score 31% Off This Smartwool Merino 150 Base Layer

Prep for Avi Season With These Short BCA Safety Videos

Up, Up, and KERPLOOSH: Watch the Entire Red Bull 'Flugtag' Aviation Competition

Launched in 2002, GearJunkie is the authority on outdoor and adventure news, gear, and culture.