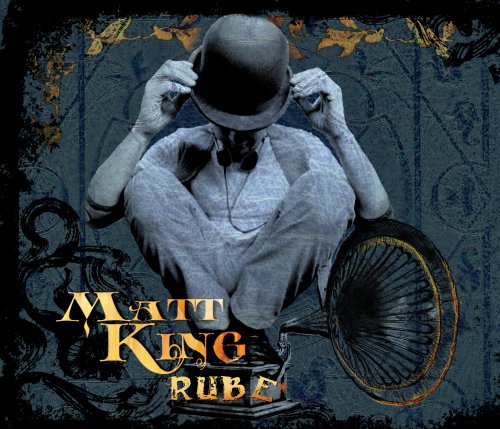 It's taken an entire lifetime of experiences to fuel Matt King to create Rube, his forthcoming full-length release for Montage Music Group. For the Nashville-based singer/songwriter/guitarist, the record is the sum total of King's childhood passions and his obsession with the gritty, all-too-often untold tales of history's common man. Setting these tales to towering, high-volume alternative rock, King has forged a musical style impervious to simple classifications and labels, with a keen edge sure to captivate rockers both young and old. "I'm a frustrated guitar player who somehow had the ability to sing as well," King admits. "When I was a kid I wanted to be in the circus--I wanted to be a clown. I was riding a unicycle. I was a carnie from 8 years old. So [Rube] is a culmination of everything that intrigued me as a child....I have always been trying to return to that place of inspiration, and have found that it's a time when I was fascinated with Lon Chaney, magicians and circuses." Harnessing that creative inspiration, King has forged Rube into an ever-engaging collection of evocative tales and personal revelations. Although he didn't know it at the time, King's investigations into his family history several years ago set him on a course that has become the guiding influence for Rube's journey into forgotten America. "My dad told me one of my great grandfathers was a Hatfield, from the Hatfields and McCoys," King recalls. "He told me stories generations back: my grandfather tarred and feathered a man; my great aunt taped her husband to a chair, boarded the windows shut, and burned the house down around him.... in the mountains people have their own brand of justice and their own way of life. I really wanted to explore those themes on this album. " King grew up playing bluegrass then migrated to playing in rock bands as a teen. He found initial success in Nashville, where he relocated to pursue label opportunities, leading to his stint in the mid-`90s on the Atlantic Records roster, a relationship that led to two albums as a solo artist. Here in 2008, now older, wiser and free of major-label restraints, King is finally making the kind of music for which he was always destined; Rube is a milestone amid King's career as a songwriter, blending the guitar-rock he's loved since childhood with the more traditional influences that also constitute his artistic palette. Rising from an extremely wide range of genres and styles, Rube is a richly textured distillation of King's evolution to date. "The [early albums] were respectable records," King concedes. "So I don't apologize for those at all, because had I not done those, I wouldn't have the content and the ammunition to do the record I just did." King also became heavily involved in music publishing in recent years, primarily writing for movies and television, while also constructing his own editing room and taking on production work. But amid all the paying gigs, King was driven to continue developing his own material, which increasingly took on some surprising flavors as the songs evolved over time. Indeed each track on Rube tells its own miniature story, like the closed-door reality of suburban meth labs ("Hell's Kitchen"), or an abused spouse's life of regrets ("Cursing the Ohio"), or a man who works as a gravedigger in order to somehow feel connected to his deceased wife ("Graveyard Shift"). Of course there are also some pointed observations on small-town life, such as "Silvertone," a tongue-in-cheek look at one local bigwig's often murky morality. "That song is about someone I know," King explains. "He's the guy in the Mason's lodge, and he sure does love Jesus. He's also the guy putting on rooster fights. I grew up in the middle of these folks." Even more powerful are King's odes to the American working man, a thematic torch he's proud to carry in his own unique way in the wake of the legacy left by the likes of Johnny Cash, the Guthries, and Bob Dylan. Tracks like "American Dream"--inspired by a $50 paycheck King once received for a week's work--and the labor-movement rallying cry "Bristol" remind us that in this world of paparazzi and celebrity fascination, the forgotten struggles of the everyman are the tales really worth telling. "There are lifestyle expectations being projected by the media portraying the lives of the spoiled and over entitled. These people seem to acquire and achieve this with no effort at all. In the meantime, the average man sitting at home watching the show just needs a crown for his rotten tooth and is working his ass off and still can't make ends meet. I know that guy, I've been that guy. This album is for us, for the misfits."

In the cracks between mournful mountain music, bright bluegrass and straight up rock, North Carolina native Matt King has found a unique style that fits his tales of backwoods saints and sinners. All tattoos and attitude, King has a smooth rolling tenor that makes him sound convincing when he croons about falling for the devils daughter, dirt floor methlabs, mountain justice and the evil that lurks in the hearts of man on his record "Rube" out February 5th. While King says he enjoys the gentile art of dumpster diving ciphering prime numbers, don't mess with this singer who claims to be kin to the Hatfield side of the Hatfield and McCoy fued. -- "i"New York Post, January 8, 2008"br""br"USA Today music critic Brian Mansfield highlights ten tracks ripe for fresh downloading...The Southern-gothic rocker sounds part revivalist preacher, part carnival barker. -- "i"USA Today, January 8, 2008, Brian Mansfield

Survival and causes of death in 2,033 patients with non-transfusion-dependent β-thalassemia

This open-label, single-arm study investigated the long-term efficacy of tafasitamab plus lenalidomide in 81 patients with relapsed/refractory diffuse large B-cell lymphoma. The response rate was 57.5%, including complete responses in 40.0% of patients, and the median duration of response was 43.9 months. This treatment is a valuable option for patients not eligible for autologous stem-cell transplantation.

Grey zone lymphoma is a B-cell lymphoma, unclassifiable, with features intermediate between those of large B-cell lymphoma and classic Hodgkin lymphoma. The in-depth study of the two adolescent patients described in this case report expands the clinicopathological and genomic spectrum of this rare pediatric disease. Moreover, it provides information on their response to treatment.

The clinical picture of 56 patients with congenital amegakaryocytic thrombocytopenia due to MPL mutations was much more varied than previously thought. Twenty-five per cent of them had no signs of thrombocytopenia at birth, and 50% had non-hematologic defects. Pancytopenia developed in (nearly) all patients and hematopoietic stem-cell transplantation was effective in 87% of cases.

Sickle red blood cells exhibit abnormal adhesion to laminin mediated by Lu/BCAM protein at their surface. This study provides evidence of the involvement of oxidative stress in post-translational modifications of Lu/BCAM which impact the protein’s distribution and cis-interaction with glycophorin C at the cell surface activating its adhesive function in dense sickle red cells. The authors speculate that antioxidant drugs might attenuate this phenomenon.

Submit your manuscript without worries: we are flexible at first submission, all formats accepted.

Browse the Atlas for free