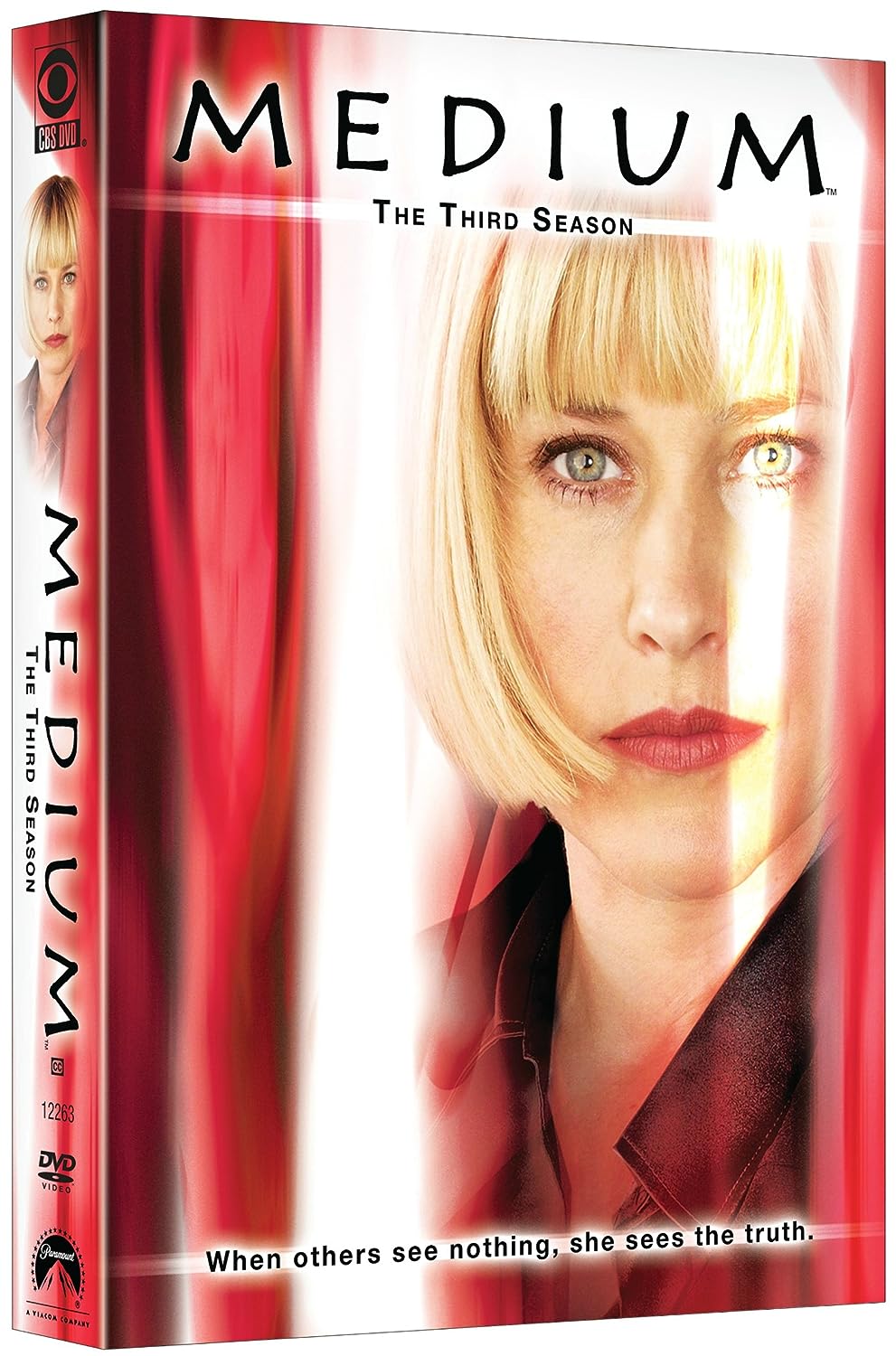 Patricia Arquette, Miguel Sandoval. These crime mysteries blend nicely with the unique skills of Allison Dubois who communicates with the dead and shares what she learns with a sympathetic district attorney in Phoenix. Includes Be Kind, Rewind" (11/22/06), Better Off Dead" (1/24/07), Whatever Possessed You" (3/28/07) and 18 more for a total of 21 episodes on 6 DVDs. 2006-07/color/15 hrs., 42 min/NR/widescreen.

Having weathered a slight sophomore slump, creator-executive producer Glen Gordon Caron's "i"Medium returns to DVD with this six-disc collection of all 21 episodes from its third and arguably best season. As ever, Patricia Arquette's lead performance as Allison DuBois, the medium/psychic whose visions of murderers, serial killers, and such make her an indispensable (and, in this season, controversial) part of the Phoenix district attorney's office, leads the way. But Medium also continues to evolve. Season Two's increased emphasis on Allison's home life with husband Joe (Jake Weber) and their three daughters (Sofia Vassilieva as Ariel, Maria Lark as Bridgette, and toddler Miranda Carabello as Marie) sometimes lessened a story's dramatic impact, but not this time. More and more, we see that the mixed blessing that is Allison's "gift" (it's one thing to have dreams that help solve vicious crimes, but quite another to be what she calls "a walking carnival trick," haunted by frightful, violent nightmares that aren't always what they seem to be) has been passed on to her children, and in some unusual ways. In "Four Dreams," the two-parter that opens the season, Bridgette dreams what her mother dreams--except the child's visions take the form of cartoons; meanwhile, "Mother's Little Helper" finds Ariel and Allison seeing the same visions from very different points of view. Joe, too, is increasingly fleshed out. The role of the spouse who struggles to understand but can't really get what his partner is going through is a tough one, but Joe's harrowing experience as a hostage is an important sub-plot throughout the final seven episodes, the last three of which (a triple-header, if you will, as all three involve a serial killer whose grisly m.o. earns him the nickname "the Recapitator") feature Neve Campbell and Jason Priestley in recurring roles. Of course, this is hardly a typical police procedural; the "i"Law amp; Orders and "i"CSIs of the world cover that ground. Any TV show helmed by "i"Moonlighting creator Caron will have its share of eccentric touches. Thus we get episodes like "The One Behind the Wheel" (Allison is possessed by a mouthy, repugnant crime victim, but Joe insists she pretend to be herself so as not to freak out the kids) or "Better Off Dead," an amusing and touching tale of a ghost struggling to accept his fate. Overall, though it has its weaknesses, "i"Medium remains one of TV's most eminently watchable series. Bonus material includes deleted scenes, a few featurettes, and occasional commentary tracks. --Sam Graham

Register to receive a 10% discount. A 15% discount is also available for parishes, schools & institutions. All offers and discounts are valid for orders placed on the website only
New Products View All
Calendars & Diaries for 2022 View All
Year of St. Joseph View All
1st Communion / Confirmation View All
Featured Products View All