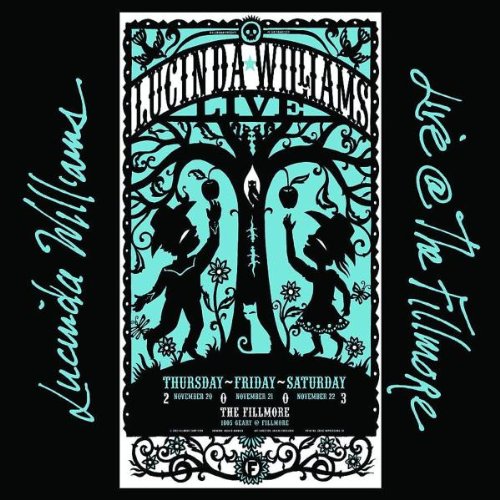 Lost Highway is set to release the first-ever live album from Grammy Award-winning artist Lucinda Williams. Lucinda recorded this collection of live songs over her 3 night appearance at San Francisco's legendary Fillmore Auditorium. Live @ the Fillmore is on double CD and comes in a deluxe packaging. All 22 tracks that appear in this collection were hand selected by Lucinda. This double album includes such favorites as 'Joy', 'I Lost It', 'Essence' and 'Blue', but Williams digs even deeper into her past with gritty versions of 'Pineola' and 'Changed The Locks'. Live @ the Fillmore features one of the best bands on the road today, with guitarist, pedal steel and background vocalist Doug Pettibone, anchored by Taras Prodaniuk on bass and Jim Christie on drums and percussion. 2005.

Few artists take the sort of emotional risks that Lucinda Williams does. Pouring her all into songs of hurt, need, and desire, she turns every live performance into an adventure, as the first concert recording of her career attests. Coproduced by Williams, Live at the Fillmore showcases her raw wound of a voice and the rough edges of her band in all their unvarnished glory, as the music cuts across conventional categories of country, blues, folk, rock (and rap) to strike a distinctly personal chord. Even the pacing is risky. Whereas most artists plan their sets to hit hardest at the beginning and end, Williams inverts the dynamic, sustaining a mood of reflective melancholy for extended stretches that open and close the album, while building to an explosive climax in the middle. With the selection dominated by recent material, the first eight numbers are like a sweet ache, as the wistful country of "Ventura" and "Reason to Cry" and the folkish minimalism of "Lonely Girls" explore the fringes of emotional fragility. Then Williams and band flex their musical muscles, shifting into the bluesier side of her artistry on "Change the Locks" and "Atonement," extending the desperate intensity of "Joy" over almost eight minutes, and offering homage to Neil Young's Crazy Horse on "Righteously" and "Essence." Backed by the barbed-wire guitar of Doug Pettitbone over the bare-bones rhythms of bassist Taras Prodaniuk and drummer Jim Christie, Williams tells the crowd, "We got the mojo workin' tonight." --Don McLeese

"h3"Review "p"Live At The Fillmore is the first-ever live recording from one of our greatest talents. -- "i"Vanity Fair - May 2005"br""br"She and her impeccable three-piece band give her songs' meticulously recorded original versions a run for their money. -- Rolling Stone * 3 Stars

Avail your complimentary Times Prime membership for 1 year worth ₹999

Does the Evergrande turmoil in China have implications for India?
Devina Mehra | Chairperson and Managing Director, First Global
ET STOCK INSIGHTS FOR THE DAY

The hows and whys

Is permanent WFH possible in India?

View: India needs a new pedagogy, not any Kota factory
View: Back home happy with Biden Bhai
View: Why it's time for India to give Modern Monetary Theory a chance

What Emma Raducanu can learn from Roger Bannister is to not be unidimensional
Kohli move to resign as T20 skipper after World Cup could affect India’s performance
Why India’s IPL and World T20 bound players cannot afford to test positive in England
Are we treating our international cricketers and sportspersons like gladiators?
Opinion »

Stories you don't want to missPOWERED BY MEDIAWIRE

Be part of Australia India Business Exchange 2021, join here
Why is there a rise of institutional investors in Crypto-ventures
How CRED pay is maximising the utility of CRED coins