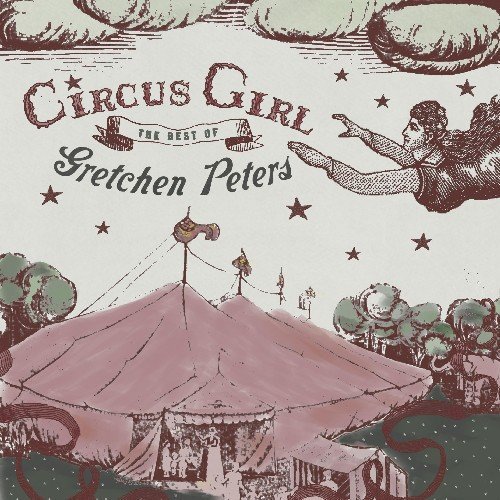 It is a deep abiding passion for the song that has brought Gretchen Peters to the Grammys twice as a songwriter, won her a CMA Song Of The Year award for the groundbreaking Independence Day, taken her on repeated sold-out tours across the UK and Ireland, and seen the release of seven critically acclaimed albums. Now with the release of Circus Girl: The Best Of Gretchen Peters, her 13-year recording and touring career finally has the retrospective collection it deserves.
Set includes two previously unreleased bonus tracks

At times it seems impossible that it was only thirteen years ago that Gretchen Peters released her debut album, and at other times I feel like I've been listening to her music for much, much longer. In reality. I have, as her songs recorded by the likes of George Strait. Martina McBride, Pam Tillis, Suzy Bogguss, Trisha Yearwood and Patty Loveless pre-date her recording debut by several years. This collection is aptly titled; as she's not had any 'hits' in terms of chart success, it is a self-compiled compilation of her best-known recordings from somewhat limited radio plays, but more importantly from live concerts. Unlike most Nashville-based songwriters who've made their money writing hits for the well-known stars, Gretchen has gone out there on the road to play her songs to an ever-increasing fan base.

Borrowing from such musical trailblazers as Carole King, Joni Mitchell and Sheryl Crow, Gretchen combines catchy songcraft and sonic adventurism with an endearing effortlessness. With a voice like polished copper in the firelight, Gretchen adds that special songwriter touch that burns like an arrow straight to my heart and soul.

Thirteen of these tracks are gathered from Gretchen's past albums, with two bonus tracks - Don't You Know and Nobody's Girl - previously unreleased. Five of the songs come from The Secret Of Life, her 1996 album debut. It's impossible for me to pick the best of them, because each one of them is an integral part of Gretchen's musical career. Let's just say that songs like On A Bus To St Cloud, The Secret of Life and Independence Day should be up there with the likes of Yesterday, You've Got A Friend and If You Could Read My Mind as genuine timeless pop classics. Other incredible songs include the heart-stirring Picasso And Me, which tells about the relationship between the famed painter and his cat, Sunday Morning, a gorgeous ballad that encapsulates everyday life so perfectly and In A Perfect World is a rhythmic gem about wanting more from life, but in the end settling for exactly what you have. Gretchen Peters is a singer-songwriter who gets to the very heart of life and relationships.

Gretchen Peters is one class act. As a songwriter she's up there with the female greats like Carole King and Dolly Parton, sharing that ability to take personal experiences and feelings and make them universal.

"p" Even if you're not familiar with Gretchen Peters the artist, you'll know her music if you've listened to any country music radio station over the last 15 years playing George Strait, Faith Hill or Shania Twain.

Circus Girl is the perfect introduction to her extensive catalogue of hits. It's a mix of heartfelt anthems like Independence Day, the Martina McBride CMA Song of the Year 1994, the mysterious On A Bus To St. Cloud (a massive hit for Trisha Yearwood) and the infectious In A Perfect World which features the voice of her sometime writing partner, Canadian rocker Bryan Adams.

"p" Collected from her four studio albums "i"The Secret Of Life, "i"Gretchen Peters, "i"Halcyon and "i"Burnt Toast amp; Offerings, with two new numbers, there's not a bad track on this album. The songs reflect Peters' life through child-rearing, divorce, falling in love and losing a parent, but they also relate to anyone who's had their heart broken, and subsequently, mended.

Through her lyrics she demonstrates her great power of observation, whether seen through the eyes of Picasso's stray cat in Picasso And Me, or the high-wire artist of the title track, Circus Girl. While she displays her barbed wit on This Town - "This town is a lot like me/Sadder and wiser than it used to be/A little sprawled out, a little run down/I wonder what's gonna become of this town."

As a performer her charm is the rawness of her delivery. The simple acoustic guitar and piano accompaniment on the majority of tracks allows her crystal-clear voice to shine. Like Emmylou without the vibrato or Maria McKee without the whisky hoarseness, her voice gives the songs a vulnerability and authenticity.

She's at her purest when singing from the heart, as on the I Will Survive-type anthem Tomorrow Morning, the feel good Sunday Morning or When You Are Old, a poignant celebration of ageing love which ranks up there with John Prine's Hello In There.

Her biggest hit, Independence Day, is hardly recognisable from Martina McBride's power ballad in its rawness. Over 15 years old, the power of its anti-domestic violence message is as strong as ever. When Republican Sarah Palin used it in her election campaign, Peters donated the royalties to the Planned Parenthood pro-choice campaign in Palin's name. Martina may have made it famous, Gretchen does it justice.

Of the two new tracks Don't You Know is a slice of late-night lounge jazz while Nobody's Girl would sit comfortably on any McBride album.

Peters says great songs are born out of pain, anger, joy and wit. This is the work of a woman who knows how to laugh and cry and can move listeners in the same way. --Country Music People (UK)

For optimal experience, we suggest viewing on a mobile device using virtual 360° glasses. Otherwise, you can navigate on a stationary monitor by clicking-and-dragging or by using the arrows in the upper left.

From VR to 3D, how DC-area universities found innovative solutions for pandemic challenges

From the Washington Business Journal

November 6 @ 9:30 am - 5:00 pm Allow us to welcome you to all that Marymount University has to offer during our College of Business, Innovation, Leadership, and Technology (BILT) Open House.

Join us for an in-person Homecoming Weekend. There are over 26 events planned for you and your family to enjoy.

Sunday, October 10, 2021 Visit campus this fall during our Undergraduate Open House. Get a tour, have lunch, speak with faculty, and start your Marymount journey!

Saints On the Go

Alyson McNair is a graduate student pursuing a degree in Fashion Merchandising and an M.B.A. She's also the founder of Perfect, Inc.

Isabel Trojillo '22 is a member of Marymount's Honors Program and Women's Golf team. She is studying Nursing and currently completing clinical rotations.

Jasmine Roy '21 is a member of Marymount's Honors Program and the Women's Volleyball team. She is pursuing degrees in Biochemistry and Mathematics.

Roey Stern '22 is a member of the Men's Basketball team, and is studying Business Administration with a Marketing specialty and Data Science minor.

Marymount University: A College of Distinction

Our student-centered, one-of-a-kind educational experience has given national recognition to Marymount University as a College of Distinction.

Marymount was honored for its strong liberal arts foundation with a global perspective, an emphasis on service learning and the University’s inclusive campus community. Here, our Saints “Learn with Purpose” through small class sizes, extensive research and leadership development opportunities, internship and career connections and numerous study abroad programs.

Get to Know Marymount