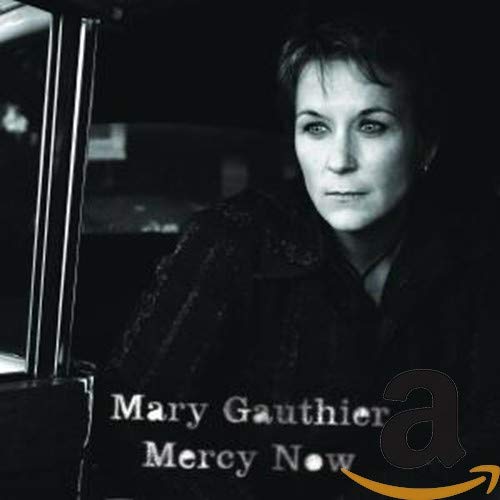 A spark of redemption illuminates even the darker songs on Mercy Now, the fourth album by Mary Gauthier (pronounced "go-shay"). The influence of her native Louisiana pervades her Southern Gothic songcraft, which first won an audience in the folk clubs of Boston. After a series of releases on independent labels, her Lost Highway debut seems destined to expand that audience significantly. Within her mature, weather-beaten artistry, Dylanesque metaphysics go to Mardi Gras on "Wheel Inside the Wheel"; the naked emotion and eye for detail of "Your Sister Cried" and "Empty Spaces" conjure comparisons with Lucinda Williams; and the plainspoken "I Drink" and "Drop in a Bucket" have the bittersweet bite of the best of John Prine. The spare arrangements of producer/guitarist Gurf Morlix, punctuated by cello, organ, and harmonica, give the material plenty of room to breathe. Gauthier's vocals are half-spoken, half-sung, and all soul. "i"--Don McLeese"i"

"h3"Review "p""Wheel Inside The Wheel" is reminiscent of Mule Variations-Tom Waits-wafts like smoke from a New Orleans cocktail lounge. -- "i"Paste"br""br"Gauthier's songs unfold like country versions of noir films, their spaces surrounded by shadows, grim details and bruised emotions. -- USA Today, 2/15/05 ** 3 out of 4 Stars

Her bayou laments are sparse and simple, but her artistry is pure and absolute. -- Playboy, March Issue ** 3 out of 4 Stars

The beauty of Gauthier's country noir lies in the humanity of her characters and in the yerning of her drawl. -- "i"Entertainment Weekly - B+"br""br"This is an unsettling work of terrible beauty. -- "i"American Profile "h3"About the Artist "p""I know in my heart that I should be dead. Most of my friends are dead. The way I lived, I had no respect at all for my own life. So I'm living on borrowed time-and there's liberation in that." She's one of the most challenging performers to rise up from the underground in a long time.

"I was adopted when I was a year old. My adopted parents tried, but their marriage was doomed. Music saved my life."

At fifteen she stole her parents' car and raced away from Baton Rouge into a life that she remembers only as a blur. "I went into detox, ended up in a halfway house, got thrown out, lived with my mother again for a week. I ran away again, ended up at another detox and another halfway house, found friends to stay with, and I was off and running for a good ten years. I stole something out of a car-a bottle of pills or something-and I ended up in jail for my 18th birthday. They let me out, I got thrown out of Kansas, and I just kept running."

"p"Years would pass before Mary would find her muse. She enrolled at LSU as a philosophy major. When drugs became too hard to handle, Mary dropped out in her senior year and left for Boston, where she endured crappy jobs before working the counter at a little cafÃ©. Somehow she moved ahead in the midst of her addictions; after being promoted to manager, she rounded up some backers who paid her way to the Cambridge School of Culinary Arts, from which she emerged with a plan to open a Cajun restaurant in the Back Bay. "p"Dixie Kitchen proved a success. But the maintenance was drudgery. Maybe that was a flashback to my parents' monotonous life. Whatever it was, I hated it."

Once more Mary ran-but now she knew where she was going. She tried again to get off the bottle and the drugs, and this time it worked. Then a little miracle happened: Without warning, Mary found herself, for the first time, writing songs. "It was like, bam, two neurons touched, fused, connected, and the next thing you know I'm obsessed with getting words down in a song to make sense of all this, to try and understand my own life."

"p"Mary wrote her first song, when she was clean and sober at the age of 35. "p"Mary's first CD, Dixie Kitchen, earned her a Boston Music Award nomination for "best new contemporary folk artist". "That gave me some confidence. I really started writing hard and strong. I spent less time at the restaurant and more time at my writing desk. I was passionate about songs.

She sold her share in Dixie Kitchen to finance her second album, Drag Queens in Limousines. "All hell broke loose": Rolling Stone gave it a four-star rave, MOJO, Q, Gavin Report, and other publications joined in on the chorus, and she reaped an Independent Music Award, "country artist of the year" from GLAMA, and multiple dates throughout the folk festival circuit and Europe. The third release, Filth amp; Fire, inspired critics in the Freeform American Roots poll to pick her as the top female artist of the year, and won benediction from No Depression as "the best singer/songwriter album of the year."

On Mercy Now Mary reaches even higher by dredging deeper through the backwaters of her life. These songs reflect her mastery of image, her determination to find precisely the right word, sometimes through months of labor over a single line or idea.

Mercy takes its place alongside the furies that first whipped Mary's poetry toward its desolate eloquence. This is the step that will elevate her into the company of the greatest of writers and singers-the truth tellers.

"p""Every living thing could use a little mercy now Â I love life and life itself could use some mercy now."