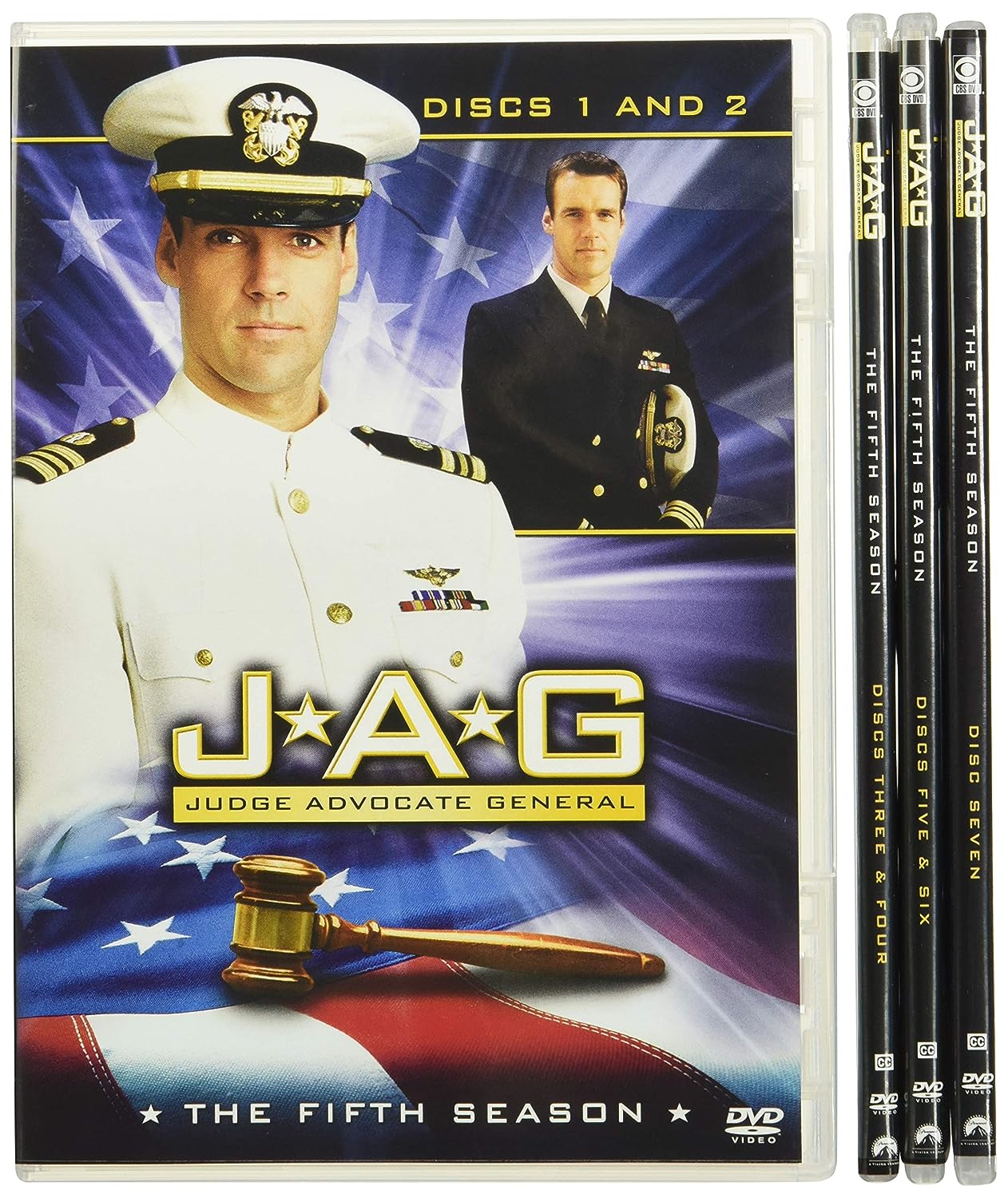 In this explosive hour-long dramatic adventure series, David James Elliot stars as Lieutenant Commander "Harm" Rabb, Jr., a brave, outstanding Navy Lawyer and officer in the Judge Advocate General (J.A.G.) Corps. His missions are to investigate and prosecute all crimes, accidents, acts of terrorism and espionage related to the Navy and Marine Corps. Playing the diverse roles of investigator, prosecutor and defense attorney, Harm and his partner Major Sarah "Mac" MacKenzie (Catherine Bell), use their intelligence and determination to uncover the mysteries behind cases involving murder, treason, espionage and other high crimes to bring world-class criminals to justice. JAG combines all the intensity of the battlefield and all the suspense of a criminal investigation into an action-packed hour!

JAG (Judge Advocate General): The Fifth Season opens with Commander Harmon ("Harm") Rabb, Jr. (the always low-key David James Elliot) ensconced aboard a U.S. Navy carrier, as part of a flight team running peacekeeping missions over Kosovo. Trying hard to ignore his career as a military attorney and accrue pilot hours, Harm still draws legal cases that require his more seasoned skills as a litigator. The two-part season debut "King of the Greenie Board" and "Rules of Engagement" find Harm defending a young fellow flier who kills three Russian peacekeepers he mistakenly thought were Serbian troops attacking Bosnian civilians. Meanwhile, Harms replacement back at JAG headquarters is a tough-looking and ambitious Aussie named Brumby (Trevor Goddard), who has romantic feelings for Harms longtime colleague, Sarah "Mac" MacKenzie (Catherine Bell), the latter promoted to full colonel in season five. No sooner does that case wrap up then Harm finds himself dealing, in "True Callings," with another pilot who took deceptive measures to smuggle a pregnant Bosnian aboard the carrier for medical treatment. Befitting the title, Harm has to face the music about his work: hes too old to ramp up his flying career.

Returning to JAG central, he gets handed the usual mix of uncomfortable and mysterious cases. In "Front and Center," Harm and Bud (Patrick Labyorteaux) discover a crucial witness in an attempted rape case is actually not whom he says he is--in fact, hes disappeared rather than have his identity found out. The unusual "Psychic Warrior" finds Harm, Mac, Bud, Brumby and Admiral Chegwidden (John M. Jackson) on both sides of a case involving the death of an officer who was both a "pharmacological nightmare" (taking a dangerous mix of anti-anxiety and anti-depression medications) and a volunteer in a strange, Navy program investigating the paranormal. "Contemptuous Words" is a different kind of JAG episode in which Harm is accused of writing a newspaper editorial heatedly critical of the U.S. president, a big no-no in the military. While the wrath of the government falls on him, Harms JAG friends work at figuring out who has such a grudge against him that theyd see him go to jail for years. "Ghosts of Christmas Past" is another offbeat tale, this one concerning Harms late father (also a navy pilot) and a 1969 visit to the latters carrier from a Bob Hope USO tour. While actors have been cast as such Vietnam-era celebrities as Phyllis Diller and Diana Ross, the cast of JAG play fictional characters from that earlier time. (Its a gimmick, but its fun.) Finally, "The Witches of Gulfport" is a weird story concerning Macs undercover investigation of a Wiccan group made up of Navy personnel. (Who knew there are witches and warlocks in the Navy?) As always, the series production values are impressive, with lots of scenes set around the world, plenty of captivating stories, and enough relationship complications to keep things very interesting. --Tom Keogh

Welcome to Humanities Commons, the network for people working in the humanities. Discover the latest open-access scholarship and teaching materials, make interdisciplinary connections, build a WordPress Web site, and increase the impact of your work by sharing it in the repository.

Using the Commons for Canceled or Virtual Events

For those who have had to cancel events or shift to virtual meetings in response to COVID-19, this post provides information about ways Humanities Commons could be a resource.

Are you being asked to move your course online in response to COVID-19? The MLA has gathered some resources on this Commons site.

Looking to update your presence on the Commons?

Do you want some ideas for how to refresh your online presence? You can use these Honeywell HUL535W Cool Mist Humidifier, White as a guide!

The Educator’s Guide to Humanities Commons

Recently on the Commons

We're committed to remaining free and open to all. Your donation will help support the network as we expand.

Humanities Commons is proud to be a partner in the Metascience 2021 Conference, presented by the Center for Open Science. The conference will be online September 16-18 and 23-25. Registration is open now!

Go to CORE to upload and archive work in our open-access repository.